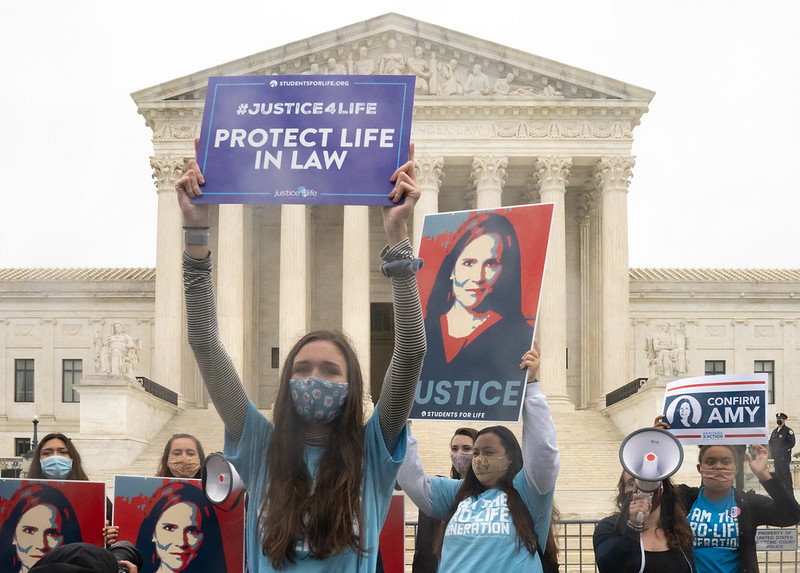 What does the nomination of Amy Coney Barrett to the Supreme Court mean for women and the LGBTQ community?

President Trump’s nomination and a subsequent rushed confirmation of Amy Coney Barrett to the Supreme Court has been controversial from the very beginning, for a plethora of social and political reasons. Replacing liberal judge Ruth Bader Ginsberg, a tireless fighter for women’s rights with a conservative candidate whose religious beliefs might influence decisions affecting millions of women and the members of the LGBTQ community, seems like turning back decades of progress.

Amy Coney Barrett is a graduate of Notre Dame, a prestigious Catholic University which is often criticized as being too liberal, and attacked by Christian conservatives for lack of opposition to birth control and abortion rights. As an alumnus of Notre Dame, and a professor at the University for over 15 years, one could assume that judge Barrett is supportive or at least open-minded about these issues.

However, the Supreme Court Justice who is a devout Catholic remains quite outspoken about her personal views on the topic. Guardian journalist, Stephanie Kirchgaessmer reveals that Barrett “has advocated against abortion, abortion rights, and publicly supported the reversal of Roe v Wade in the years before she joined the federal bench.” The newspaper also reported that Barrett called the legacy of Roe “barbaric”. Given that judge Barrett is only forty-eight years old and that the Supreme Court appointments last a lifetime, generations of women have a reason to worry. Nancy Northup, president and CEO of the Center for Reproductive Rights, expressed her concern in the interview with CNN’sAriane de Vogue by saying that justice Barrett will “gut Justice Ginsburg’s legacy and turn back five decades of advancement for reproductive rights.”

Women are not the only group of Americans whose rights will be under attack as a result of Barrett’s confirmation. The newest Supreme Court Justice is also known for her strict criticism of the LGBTQ community, especially their right to marry. Robert Reich, a professor of public policy at the University of California at Berkeley wrote in the article for The Guardian that Justice Barrett “might provide the deciding vote for reversing Obergefell v Hodges, the 2015 supreme court decision protecting same-sex marriage.”  Judge Barrett’s justification for her position is that “right to same-sex marriage“” is not explicitly written in the text of the constitution, therefore can be deemed unconstitutional and invalidated as a result.

It is difficult to imagine the consequences of those reversals. Will the marriage between guy people ceased to be recognized as legal if justice Barrett joins the Supreme Court? Will women be forced to go back to relying on underground clinics and risk their lives receiving unsanitary abortions from the hands of unqualified personnel?

During her confirmation hearing, judge Barrett tried to assure the American people that her religious beliefs will have no bearing on her interpretation of the law, and consequently her judicial decisions, but doubts and concerns remain.  What we know for sure is that her confirmation will cement a conservative majority on the Supreme Court and allow Republicans to take over women’s reproductive rights, and make crucial decisions affecting the LGBTQ community.