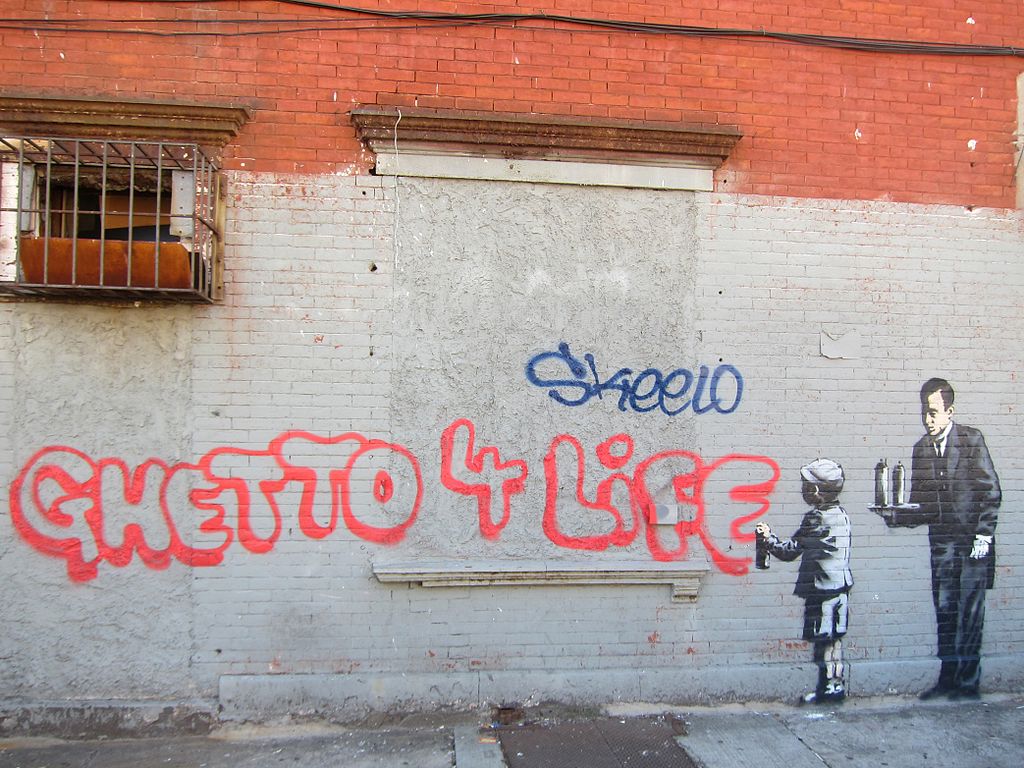 Living in New York City, it’s hard not to take notice of all the eye-catching graffiti. Have you ever asked yourself, “I wonder what the inspiration and meaning behind this art is?”

Behind this type of art there is a story with feeling, emotion and soul poured into it. One Chicago artist, Milton Coronado, painted a beautiful mural on 16th Street and Newberry Avenue, dedicated to his mother, who was brutally murdered. Creating this art has helped him heal. Perhaps the most famous graffiti artist today, Banksy, aims to deliver meaningful messages to the public, delivering many through the streets and bringing the world of art to the public. Banksy once said, “Keep your coins, I want change.”

Many other graffiti artists have felt ashamed of their talent growing up. But why? In our society there has been a stigma around graffiti — and anything that’s spray painted or airbrushed is automatically graffiti. Graffiti is seen as illicit and considered to be vandalism and bad for communities. Society also tends to confuse “street artists” with “taggers,” a group of people who violate people’s art out of pure ego, to grab people’s attention and vandalize without consent.

Street artists, by contrast, are people who want to revive communities and tell their stories through color. In my opinion, it is not. Graffiti is an art, not simple wreckage on a trash can or an alley wall. It can represent powerful meanings in every detail, style, and color, and poses many benefits.

Graffiti, in other words, is a way for artists to express themselves in a non-formal setting. The artist’s intention is not to cause disruption but to publicly display their artistic philosophy. The beauty of graffiti comes from the spontaneity of the artist’s mind. “My findings indicate that since 1990 a subset of graffiti writers who paint with permission has emerged,” states Ronald Kramer of Western Connecticut State University in his article “Painting with Permission: Legal Graffiti in New York City.” He concludes that “graffiti art needs to be acknowledged as a multifaceted and historically fluid culture.” Making graffiti illegal would be equivalent to limiting freedom of expression, which is a violation of human rights.

Banksy, known for his controversial statement paintings in highly populated areas in urban areas like LA or Times Square, created this art in order for anyone and everyone to hear his voice. He shared his ideas that commented on political and satirical views of the world. He made images about corruption, wars, and many issues in the world that get “swept under the carpet”. “He speaks for a generation,” said Maeve Doyle, artistic director of London’s Maddox Gallery. Bansky’s goal is to be heard, spread awareness and change the world with his art.

Another international example is the Berlin Wall, now the world’s largest graffiti gallery and allows many artists to creatively express their ideas and art. The Berlin Wall’s images inspire by displaying the artists’ personal and national history and their commitment to freedom of expression. Many of these works represent escaping over the Berlin wall or the day it fell — one, in particular, called “It Happened in November” by Kani Alvi depicts the facial expressions and emotions the East Germans felt when the wall fell and how they finally crossed over to the west. “Detour to Japan sector” is the name of another image painted by East German artist Thomas Klingenstein, whose mural evokes his childhood desire to explore Asia, which was a place East Germans were not allowed to learn about, let alone travel to, when East Germany was under the control of the Soviet Union. “Vaterland” was the name of another by Gunther Schaefer and it’s a combination of the Israeli flag and the German flag to honor the fiftieth anniversary of Kristallnacht.

Graffiti brings life to communities and allows artists to express themselves and use art as a therapy. For Chicago artist Milton Corondo, art was always a way he could creatively express himself and cope with his pain. In high school he became an extremely talented airbrush and spray paint artist and became obsessed with graffiti, but feared it was wrong and he could get arrested for it. After high school he attended the American Academy of Art and met many graffiti artists just like himself. He jumped into the world of graffiti and devoted himself to it. “I was in a very deep place of grief,” he explained. “I felt like I couldn’t just give up on life. I felt like I owed it to my parents who taught me about Jesus, to learn more about Him. I realized art also can help me and help others. It wasn’t until three years ago that I was able to do the mural. I realized how healing it can be, like art therapy.”

Graffiti adds character and aesthetics to cities and communities. Psychological studies have shown that what surrounds us affects our psychological state. It may even unconsciously help relieve stress for some. It gives the community a personality and can inspire people and draw them in. Graffiti art in school buildings often touches students and motivates them. Students may even take certain routes to their next class just to pass a mural on the way because it gives them joy.

What led me into the world of art was my anxiety. I started picturing things out of the box, I would go to art museums and automatically see a picture and know what the artist was trying to show to their audience. That motivated me into painting. The colors would set different moods that I was feeling. Eventually, I started selling my art. What I learned from this experience was that you cannot expect society to understand why you do what you do. There will always be negative feedback, there will always be hate. I’ve never done street art before but I would love to experience it one day. This is who the world should learn from, people who can inspire, teach, and help the world understand the meaning of art.

Graffiti truly is art and it has incredible meaning and importance to many people and cities. It is beneficial for artists by giving them voices and encourages freedom of artistic expression, bringing neglected areas in cities to life. Graffiti should be seen as art and not vandalism. Like Banksy and many other graffiti artists, I believe that graffiti and art can change the world.