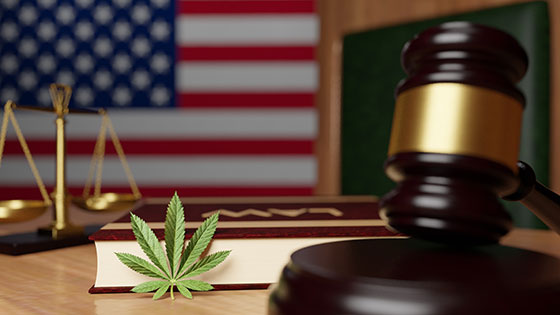 In 1970, the United States placed cannabis in the Comprehensive Drug Abuse Prevention and Control Act which criminalized all uses of cannabis including medical use. According to the Drug Enforcement Administration, all cannabis products were classified as a schedule one drug under the controlled substance act. Criminal defense attorney firm Worgul, Sarna & Ness explain that a schedule one substance is highly likely to cause dependence or harm with no medical benefits in the United States. A lot has changed in the last half-century since the laws were enacted including new scientific research and the American public’s sentiment.

Due to legality, medical research into cannabis has been difficult. Although the places where cannabis is legal research has shown great promise. According to Healthline, cannabis has shown to have an anti-inflammatory effect on the body’s nervous system and provide relief from neurological disorders such as anxiety, post-traumatic stress disorder, and Parkinson’s disease. Peter Grinspoon, MD of the Harvard Health news elaborates on the benefits of medical cannabis writing, “it is quite effective for the chronic pain that plagues millions of Americans, especially as they age. It is safer than opiates (it is impossible to overdose on and far less addictive) and it can take the place of NSAIDs such as Advil or Aleve, if people can’t take them due to problems with their kidneys or ulcers or GERD. In particular, marijuana appears to ease the pain of multiple sclerosis, and nerve pain in general. This is an area where few other options exist, and those that do, such as Neurontin, Lyrica, or opiates are highly sedating.”. Dr. Grinspoon helps the public understand that cannabis is medically beneficial without a chance of overdosing making it less dangerous than other drugs and therefore should not be classified as a schedule one drug.

The American public has been exposed to new research and data disproving the misconceptions of cannabis products. Gallup, Inc. is an American analytics and advisory company who for the past 52 years has been polling and gathering data on the public’s sentiment of cannabis legalization. According to News. Gallup, in 1969 a year before the controlled substance act was enacted into law only 12 percent of Americans polled were for cannabis legalization. In 2020 however, the public sentiment to legalize cannabis went up to an all-time high of 68 percent.

The collective change in the American public’s mindset has resulted in a wave of bills decriminalizing medical and recreational marijuana sweeping through the country state by state. USNEWS reporter Casey Leins states in her article that as of 2021, the United States has legalized 18 states for recreational use of cannabis. Similarly, usfacts.org reported that “As of April 13, 2021, 27 states and Washington, DC have decriminalized marijuana.”

The United States government should listen to the people and legalize cannabis at a federal level. The current Biden administration is in the best position to legalize cannabis with the democrats in control of the majority of both chambers of Congress and the oval office. President Biden ran on the promise of legalizing cannabis and he should fulfill that promise.