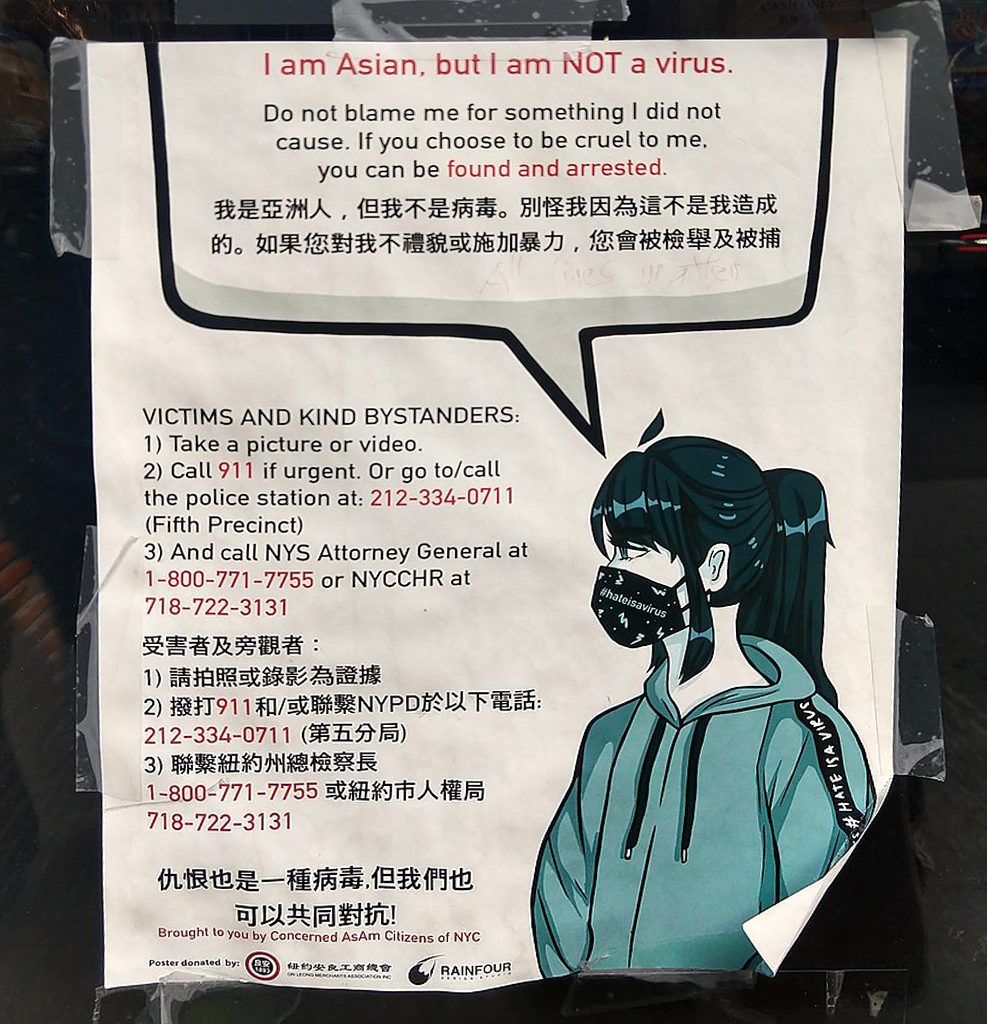 Since the beginning of the COVID-19 the pandemic, there has been an increase in racist behavior and hate crimes against Asian-Americans. Prior to the pandemic, former President, Donald J. Trump used racist language concerning those in the Asian community, adding more fuel to the fire as the onset of the pandemic began in China.

In an interview on NPR Radio by Ari Shapiro called, “Unpacking the Surge in Violence Against Asian Americans”, he speaks with Bettina Makalintal who says, ” So the fear is that – in our community is that we are at threat as a whole. But it is especially scary to be concerned that the most vulnerable members of our community – senior citizens, our families and our elders – are at risk of these violent threats out of nowhere. All of these have happened completely unprompted, it seems, by people who were just walking around in public or taking the subway.” Hate crimes suddenly springing up have had many people hiding in fear of their lives because of the randomness of the attacks. Trump’s former comment had such a negative impact that since the pandemic, attacks have jumped up.

Recent reports show a sudden rise in violence against Asian Americans across the country has sparked more outrage and many are seeking justice for those that have now died or been badly injured due to the random attacks. According to “Hate Crimes Targeting Asian Americans Spiked by 150% in Major US Cities” by Masood Farivar, it says, “Stop AAPI Hate, a hate tracker created last year by several Asian American groups, has recorded more than 2,800 incidents of racism and discrimination targeting Asian Americans between March and December 2020. While verbal harassment and shunning made up more than 90% of the incidents, physical assaults accounted for nearly 9%.” In this article it also mentions how 126 of the latest incidents included Asian Americans over the age of 60.

On January 28, 84-year-old Vicha Ratanapakdee, a Thai American, was shoved to the ground by 19-year-old Antoine Watson during his morning walk and passed two days after. More cases of physical violence against the elderly in the Asian American community have taken place like a young man shoving three elderly people in Oakland, California, and a 91-year-old man being fatally shoved to the ground. Another case was a stabbing of a 36-year-old man in New York on Thursday evening, February 25th, 2021. He is now in critical condition and the suspect, 23-year-old Salman Muflihi was charged with second-degree attempted murder as a hate crime and assault as a hate crime along with criminal possession and forgery.

Social media has become a great tool in spreading awareness of the issue and large platforms like Instagram, Twitter and Tiktok have opened the door for more discussion of the xenophobia. Mass media platforms like popular news outlets often dismiss the racism towards Asians and continue to keep people unaware of just how deep the issue is, resulting in more attacks due to ignorance. Asian Americans have taken the time to use these platforms to educate others on the racism and have encouraged others to spread more awareness to protect others.

While social media has been the primary medium for sharing stories and correcting outdated racist behavior, protests in the country have begun to fight against the racism. In New York, hundreds rallied to fight against the xenophobia in Lower Manhattan. Too many Asian Americans or those in the Asian community have been forced into silence, submission, and told to be invisible but that’s changed now.
As people push and fight for a change, #StopAsianHate trends, and countless people look to officials and the law to end the ill treatment of the Asian American community while making voices heard and issues known.

We are in the meeting now discussion your article.  Could you please find a statistic on the percentage of increase in crimes?  You can even Google it and will come up. [GU1]